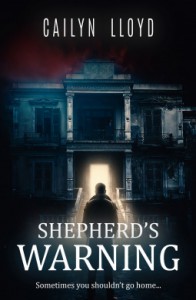 This had a very atmospheric first chapter, dated in the 1970s, then it jumps to modern day with a completely different tone. It took a few chapters for me to start getting to know the characters and get into the story, but when the supernatural things started happening, my interest was definitely piqued. There were some original ideas on the haunted house theme, as well as some well-known tropes.

The character development was rather sluggish. There was just no one with enough personality to actually like. This made for a slow read for me. Also there were a lot of incomplete sentences like "Sat and stretched out." Was the extra word really so much trouble? That's the sort of thing that can lead me to DNF, but the Horror bits were interesting enough to make me want to see what would happen.

The plotting also had problems. A plot point would get introduced and just fizzle into nothing and transitions felt clumsy. One supernatural element to the story was just suddenly there with no lead-in and was rather jarring. Moments of suspense often turned out to be other than they appeared and until near the end, there were no sustained crisis points to keep me reading.

Much of it felt unrealistic. Characters would be brought in to save the day then immediately eliminated from the action in ways that made their existence pointless. One person faints in a swoon and is unconscious for a very long time (keeping her conveniently out of the way) while another gets a bash to the head but is suddenly awake and active again. Another character is managing to do all sorts of physical things with a broken arm that should have been much more distracting at least. A fight scene reads like a Manga and the magic towards the end made me think of 1950s B-movies.

On the positive side, the use of Old English rang true, though I don't have the linguistic expertise to know if it was accurate. It looked convincing enough. The story had some good bits and the overall progression worked, but the execution needs smoothing and some practice on establishing relevance.